Following the launch of the latest Ford Focus, there will be further good news for Malaysian Ford lovers as they have also brought in 2 special editions which are the Ford Fiesta Beta and the Ford Fiesta XTR.

Essentially, both the versions are launched for special reasons. For starters, the Fiesta Beta is launched to commemorate the second anniversary of the successful Ford Fiesta sales in the country. It comes with some cool additions like the 2-tone red and black leather-trimmed seats and is available only in Panther Black. Its stripes are bold red in colour with white outlines while thye also give you chrome door lining, an iPod connection cable and a bodykit with sports decals.

The other sibling meanwhile, the Fiesta XTR gets you little less in terms of features but has a blue-coloured theme through its seats, dashboard trim and the body stripes. Safety features are pretty standard between the 2 with 7 airbags each while the XTR comes in either Aurora Blue or Cool White. This one also comes with and XTR bodykit and Sapphire stickers and carpets. 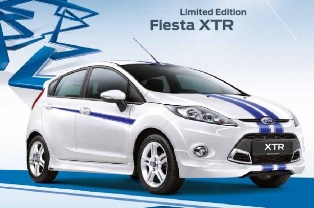