BMW Group Malaysia, who is the distributor of BMW and Mini cars in the country has launched the new Mini Cooper Countryman. According to Geoffrey Briscoe, the Managing Director of BMW Group, they are targeting to sell 2,000 units of Minis by early next year. He said that with the launch of the new Mini, the outlook will be more promising and they will look towards doing better than 1,600 units presently.

He said that they are aiming to surpass the sales growth of 3.7% for 2010 this year where they have since rolled out 222 Minis already. The new Mini Cooper Countryman is priced at RM248,888 while the higher variant, the Mini Cooper S Countryman will be sold for RM285,888 and is already currently available from its dealer network.

This marks the fourth Mini variant to be sold here and it is a 4 door, 5 seater car, which is new and very much revolutionary from the Mini as it has been long known for being a 2 door car. It is 4 meters long which is fitted with a 1.6 liter engine paired with the AW 260K, 6 speed automatic transmission gearbox that gets you up to 120 horses. It top speeds at 182 km/h and with the extra doors (which means extra weight) takes 11.6 seconds to reach the century mark.

On the Cooper S Countryman, you will get the 1.6 liter twin-scroll turbocharger, direct injection engine that comes fitted with BMW’s Valvetronic variable valve management. This makes it the first ever Mini to come with an integrated 3-in-1 technology platform. This of course is the performance version with 184 horses coming out. The gearbox is the AW225K, 6 speed transmission that top speeds at 205km/h and takes only 8.3 seconds to hit the century mark.

Coming in as standard is the ALL4 permanent all-wheel drive system and the DSC. However, the Cooper S version will get you the Dynamic Traction Control system which is also fitted with the 18 inch Turbo Fan design alloy wheels. On the standard Countryman however, you will get 17 inch 5-star Double Spoke alloy wheels. There are 11 colours to choose from with an additional glass roof package for RM9,988 which will give you a radio remote controlled panoramic glass roof. 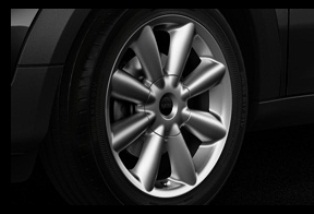