James Bond lovers, the Aston Martin have a new model coming out as they unveiled their 2012 Aston Marton Virage at Geneva. This is what they termed as supremely elegant and powerful sports car where they have kept their own trademark DNA intact. The Virage is positioned as a luxurious and comfortable vehicle with sports car performance. The Virage will start selling through its global network which go across 41 countries encompassing some 132 dealerships.
According to Dr Ulrich Bez, the CEO of Aston Martin, the Virage is the outcome of 100 years of history and experience in the automotive industry. He called it a ‘perfect balance of opposites’ and sits between their DB9 and the DBS. Under the hood is the highly efficient front-mounted 6.0 liter V12 engine paired with a 6 speed Touchtronic II automatic transmission gearbox. This gets you up to 490 horsepower on its carbon fibre prop shaft.

Giving the driver a refined driving experience, the car can be expected to derive maximum performance as it comes with the ADS (Adaptive Damping System) that detects the driving terrain and then tweaks the driving behaviour of the car. It will then select the stiffness of the suspension which have 5 levels when driving in normal mode while in sport mode, there would be another 5 stiffer settings.

Also coming in standard is the CCM (Carbon Ceramic Matrix) brakes system where it also adopts the DBS’ technology while incorporation the driving luxury of the DB9 as well as the widely popular Rapide. Single bi-xenon headlights are used here where it is also fitted with the One-77 inspired metal front grille. They also put in new front simplistic bumpers with 6 LEDs used for the side repeaters.

The cool stuff here is the swan wing doors and Bridge of Weir leather inside. According to the company, 70 man hours will be spent on each of the Virage’s interiors, contributing to 200 man hours to build the car before rolling out from its Gaydon plant in Warwickshire in England. On top of that, a 6.5 inch high resolution display has been incorporated into this one with heated seats, satellite navigation powered by Garmin, too are included. For entertainment, they have included the 700W Aston Martin Premium Audio System with Dolby Pro Logic II. 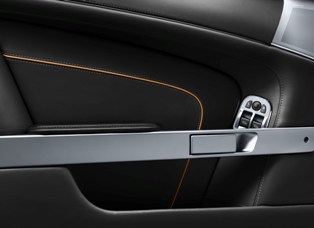 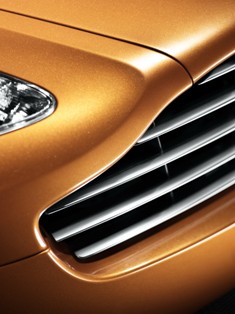 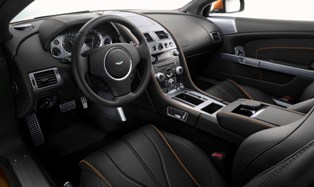