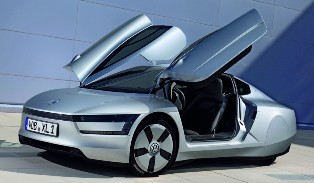 The future is upon us as more and more futuristic cars have been unveiled where they are no longer merely concepts.

This is just what German automotive giant Volkswagen (VW) has come out with when they showed off their SEV or Super Efficient Vehicle at the Qatar Motor Show early last year. Named the XL1 SEV, it has been upgraded from the concept version into the production lines which will start in 2013 (yes! That is next year).

It will not be in the mass production line as yet and according to Martin Winterkorn, the CEO of VW, the plug-in hybrid model will be rolling out through its Dresden or Wolfsburg plants in Germany where it will be a totally lightweight vehicle. As the name implies, it is supposed to be extremely efficient in which it has grown through the L1 Concept shown in 2009 and the 1-Liter car back in 2002. VW reports that running on a combined cycle will give you a 110.9km per liter fuel consumption and will powered up by an 800cc TDI, 2 cylinder common-rail diesel engine mated with the 7 speed DSG transmission gearbox. Don’t let the looks fool you though because it only comes with 47 horses through its powertrain while the electric motor gets you an additional 27 horses. Despite that, it only needs 11.9 seconds to reach the century mark. Let’s hope it gets here too.