Japanese automaker Mazda recently rolled off the covers of their new and refreshed 2012 Mazda3 in New York. And they are banking on their new SkyActiv engine technology to help boost the brand forward and to make an impact in the market. The new Mazda3 would be the first model in North America to get the new motor technology.

Launched this fall, the SkyActiv engine technology represents Mazda new direction and with the Mazda3 being used as the test bed and platform for future models, the next one to get the same treatment would be the CX-5 which is due for release next year. By 2014, Mazda will be rolliong out a diesel version of the SkyActiv. According to Jim O’Sullivan, the President and CEO of Mazda North American Operations, SkyActiv is not just an engine but represents the Mazda brand going forward and a new generation of vehicle performance and efficiency.

The 2013 Mazda3 comes with a 2.0 liter, 4 cylinder direct injection petrol engine. It is supposedly very economical where on paper comes with a 40 miles per gallon figure on the highway. The engine boosts out 155 horses at 6,000rpm and 148 lb-ft of torque at 4,100rpm. This is where Mazda has put in a 5% increase of power and 10% increase in torque and as compared to the current Mazda3 2.0 liter version is about 4.4 pounds lighter too.

The SkyActiv engine is paired with either the 6 speed manual transmission or 6 speed automatic transmission gearbox which are both part of the new SkyActiv technology. The automatic version is called the SkyActiv-Drive while the SkyActiv-MT is the manual transmission version. The new 2013 Mazda3s will come in the sedan and hatchback versions and the SkyActiv-G engines will be fitted in both the versions. Basically, they have made some minor cosmetic changes to the exteriors with the front fascia getting a new nose. Comparatively, the SkyActiv-Drive integrates the CVT (Continously Variable Transmission) and DCT (Dual Clutch Transmission) systems respectively which gives the car a lot of efficiency while the SkyActiv-MT would provide a more responsive driving experience. Apart from the standard safety features, it now comes with the new BSM (Blind Spot Monitoring) system. 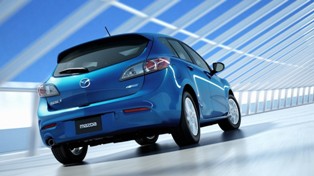