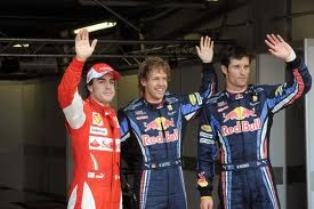 It was not considered a setback for Red Bull Racing at the Silverstone Grand Prix in England despite not wining the race.

In fact it was more like a game of musical chair for Sebastien Vettel who had to settle for second place to Ferrari’s Fernando Alonso. Coming in third is Vettel’s team mate Mark Webber. This would be Alonso’s first win of the season with McLaren’s Lewis Hamilton finishing fourth. Mercedes’ Nico Rosberg was fifth while Sauber’s Sergio Perez was sixth and Nick Heidfeld of Lotus Renault finished seventh.

There were some drama on the track with pit stops being the main influencing factors of the outcome and Red Bull had to be content with being second and third after some very slow pit stops. However, the main drama would be the team order given by Webber who after overcoming Hamilton into third place, he seemed to want to go for second place ahead of Vettel. And then the order came to ‘maintain the gap’. And he did. Despite finishing second, Vettel is still having quite a comfortable lead over his team mate where he now leads with 204 points. Webber has 124 while Alonso has 112. Hamilton and his team mate Jenson Button both has 109 points while Felipa Massa is far away with only 52 points. The very challenging Nurburgring in Germany is next.