Skip to content
Auto.my – Car News & Classifieds
/
B5 biodiesel available in 247 stations in Kuala Lumpur, more on the way

Tan Sri Bernard Dompok, the Minister of Plantation Industries and Commodities recently launched the introduction of the B5 biodiesel fuel for the Federal Territory of Kuala Lumpur.

This was part of the roll-out plan to offer alternative fuel for regular diesel where it is expected to be implemented throughout the country by 2013 as the companies will need time to build blending facilities to derive the fuel.

The B5 biodiesel consist of 95% normal diesel and the rest of palm methyl ester and it is right for use on normal diesel vehicles and will be sold at RM1.80 per liter, the same price as common diesel prices today. An estimated RM106 million has been allocated by the government to subsidize the B5 and diesel next year. He also reported that some 890 tonnes or 1.03 million liter of palm biodiesel will be used in a month with 247 petrol stations being supplied with this fuel which means that 12.4milion liters of fossil diesel will be saved a year in the Klang Valley. The launch in Kuala Lumpur is the fourth location with Putrajaya, Malacca and Negri Sembilan being the first 3 locations. With the plan to go nationwide by 2013, Selangor will be the next state. 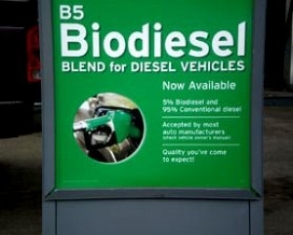