Skip to content
Auto.my – Car News & Classifieds
/
Bajaj RE60 is slimmer and smaller than the Tata Nano

In what is seen as direct competition to the Tata Nano, the world’s cheapest car, the Bajaj RE60 is surely going places with its sheer size and features.

This is typically a 4 city vehicle which will be put on show at the upcoming New Delhi Auto Expo. Targeted at the Indian automotive market, it is coming out of Bajaj’s factories after the failed collaboration plan with Renault-Nissan.

According to the Indian automotive company, the RE60 is an ideal vehicle to get around swiftly in the crowded cities of India as it is small and very compact. It comes with a 200cc, single cylinder petrol engine and gets to a top speed of 70km/h and it is also very eco-friendly too, emitting only 60g/km of CO2, which is ideal for the Indian roads. At the moment, Bajaj is only looking to sell the RE60 in the local market and whether or not it would make it into other markets would depend largely on whether Renault-Nissan is interested to rekindle their partnership.

Despite the similarity in size and stature, Bajaj claims that they are not competing directly with the Nano and that they are looking to target the 3 wheeled vehicles a safer, 4 wheeled and more affordable vehicle. That would be an indirect competition for Tata for sure. 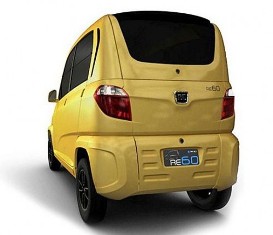