Seen recently at the Geneva Motor Show is the new De Tomaso Deauville. Earlier codenamed SLC, news of a new model from De Tomaso had surfaced even before the show. Known to some reviewers as the Pantera lookalike, the 4 door Deauville is designed by prime Italian design house Pininfarina. In fact, Pininfarina will be the plant which will be rolling out De Tomaso’s vehicles. De Tomaso has been given a new breathe of life when GianMario Rossgnolo bought over the troubled company in 2009 and then included Pininfarina to producing their new models. He is also reportedly discussing with the Italian government on plans to roll out its luxury city car, the fourth of its series through the Sicily factory belonging to Italian giant Fiat. The rest they say is history.

De Tomaso in its early models were placed along the likes of Ferrari and Lamborghini, and while the 2 supercar makers went on to create milestone after milestone, De Tomaso found themselves stuck in the problems of financial difficulties. They have been involved with the Maserati Biturbo and Quattroporte when they owned the brand which was until 1993. Their own trademark could be seen in the Pantera and Mangusta.

Rossignolo’s investment of €116million meant that De Tomaso is somewhat back in the game with the Deauville will be the first of the 3 new models to come out of its plant and according to Rossignolo, this is the luxury sedan model that comes with a sporty soul. In saying sporty, it comes with a DOHC V6 turbo engine developed by GM that gets you up to 300 horses which the company claimed to be following its early De Tomaso tradition in adopting American technology. To clarify this, their earlier models, the Pantera and the Mangusta were both fitted with Ford’s V8 engines.

For the Deauville, it is fitted with UNIVIS which is developed by IAI or Innovation in Auto Industry, a company owned by De Tomaso where the car is made entirely using aluminium, making it light and strong. The same material too is used in the rear LSD system while the other lightweight material, carbon fiber is used for the interiors. They are targeting to roll out 3000 cars annually where De Tomaso is looking to send in about 5-10% of this target into the United Kingdom. Apart from that, they are planning for a new De Tomaso Pantera 2 seater model which will replace the 40 year old model. 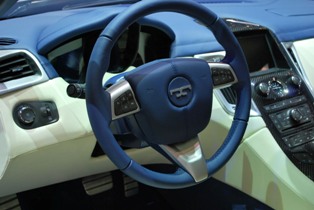