A sum of RM1billion has been agreed on the collaborative agreement between local automotive giant DRB-Hicom Bhd and its new partner, German car maker Volkswagen AG. The 2 automotive companies signed an agreement recently which will enable DRB to assemble Volkswagen models in Malaysia and this put the company further up the market and will also help to propel Malaysia into becoming Asean’s automotive hub.

Datuk Seri Najib Tun Razak, the prime minister said this at the signing ceremony on the exclusive collaboration and licence agreement between the 2 companies where he also said that under the National Automotive Policy (NAP), there are various incentives provided by the federal government to help companies establish their businesses here. This he said include customized provisions which also include tax reliefs.

He also said that with the agreement, Malaysia could well be on its way into transforming into a manufacturing hub for VWAG. He also commended on the recent increasing rate of multinational automotive manufacturers into Malaysia where he said that it shows that this shows the growing confidence in the country with its improving economy as well as its policies which are investor-friendly. Najib who is also the Finance Minister also urged local companies in this sector to continue to reinvent themselves through innovation and to adopt contemporary technologies in order to stay relevant and competitive in the fast paced industry.

On top of that, the efforts put in place by the government alone would not be sufficient to drive the Malaysian automotive market and said that the private sector too would have to play their part in order to capitalize on the strategic location of the country with its efficient transportation system. Hence it would be an ideal regional automotive hub where it would spur the industry and create more jobs as well as business opportunities.

Under the agreement between VWAG and DRB-Hicom, Najib said that it would help to achieve the localization objective where certain components for the manufacturing of VW vehicles would be localized and is targeted to achieve 40% of local content from its Pahang automotive plant in Pekan. Vehicles rolled out from the plant will be targeted for the Malaysian market and then rolled out for the surrounding Asean market after that. 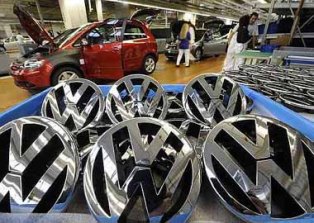