The new Ford Everest is not a cheap car. In fact, at around RM170k, it can be considered to be quite costly but then again on one hand, this is a Ford and on the other, it is an SUV. So typically, the price tag do actually suit what you are getting. The 4×4 element here is well preserved and it does not disappoint. In fact, if you are driving this car, you should go all out because it is made for that particular purpose, to go all-terrain.

Perhaps the Everest, as its name suggest tells you all about its capabilities which is to climb, to go through dirt roads, off road driving and such (maybe getting to Everest is pushing it too far). But with a name like this and coming from Ford, you can expect it to do wonders and it will. So, roads in KL might not be the best test bed for the Everest which is probably why you do not see so many of this big vehicle roaming around. East Malaysia might be a better bet here.

For starters, it is a very spacious car and in saying so, we mean that it sits 7 passengers when the third row is fitted. In fact, if you are off fishing, camping or on outings like that, the third row of seats can be removed completely so that you get a lot of cargo space behind. Otherwise, folding them down which can be down very easily might just be enough.

There are 2 variants here which is the XLT and a Limited Edition model which are powered up through its DuraTorq TDCi engine. The engines are mated with either the 5 speed manual transmission system or a shift on the fly, 5 speed automatic transmission gearbox. Rubbers used are 16 inch ones wile 18 inch tyres are optional.

For a car this size, you might not be expecting it to be super fast as it takes about 14 plus seconds to reach the century but it is powerful enough considering that it is 3 liter engine. One thing for sure, running on diesel means that the Everest is one fuel economical car. So, at RM176,791 it might be quite worth the buy. 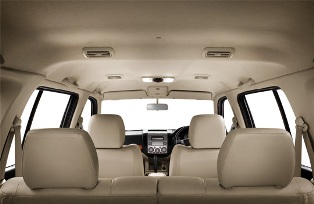