American auto company Ford showed off their Ford Vertrek Concept Crossover at the Detroit Motor Show and got everyone buzzing with speculation of it being the replacement of the Ford Escape in the future. This model, which is sold here in Malaysia is also known as the Kuga sold in the European markets. Typically, it is a bigger and larger model as compared to the current fleet of CUVs and this concept surely has the DNA of the current Ford designs especially with their new 2012 Focus and some from the Escape as well.

Positioning it as a sleeker and more stylish CUV, it represents the company’s future direction in the development of vehicles in this segment and was built based on the global C-segment platform of the company. At the moment, it is still at concept level but this would most likely make it to production as it epitomizes the future design and platform of Ford products. the new Focus too have been developed based on this.

Ford’s new global C-segment platform will be responsible in churning out some 10 new models at least where it will replace 3 current platforms and this is expected to bring in more than 2 million units in sales. Ford’s Escape has been one of the pioneering models to have made this segment one of the fastest growing one in the United States while in Europe, it has also been growing.

In the concept and with most of Ford’s current and future vehicles is the EcoBoost engine which pretty much is the gasoline version while they will also be providing a diesel model in its TDCi (Advanced Turbo Diesel Common-Rail Direct Injection) powertrain. The 1.6 liter 4 cylinder engine is fitted into this one and Ford is planning to provide the EcoBoost option for 80% of its products worldwide by 2013.

And then there is the Auto Start-Stop system which is already featured in some current models where it has an automated system that shuts down the engine and starts up by itself when the car is idle and when it is ready to move again. This saves fuel and CO2 emission by u to 5% while in traffic jams, the percentage is twice higher. While all this is already available, surely the earth would not mind having more models like these to go around. 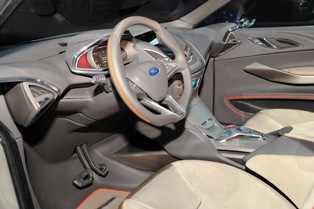