The official distributor of Kia vehicles in Malaysia, Naza Kia Malaysia announced that they have already received more than 300 bookings for their recently launched Kia Sorento 2011. Naza Kia recently took the covers of their new 2011 Sorento at the just concluded KLIMS (Kuala Lumpur International Motor Show) 2010 and since then they have been overwhelmed by the response of its customers.

The new Sorento is one of the new models to come with the new design language from Kia and with the 300 bookings, this has exceeded their sales target of rolling out 150 units per month. SM Nasaruddin SM Nasimuddin, the Chief Executive of Naza Kia Malaysia said that the positive response has given them the confidence that the new SUV will be well received by its customers here as not many models in this segment are able to offer the type of capabilities, comfort, style coupled with the performance provided by Kia’s new offering. The Kia Sorento will be put into the showrooms of Naza Kia Malaysia throughout the country very soon.

The 2011 Kia Sorento comes with a 2.4 liter, 4 cylinder DOHC CVVT engine that gets you up to 172 horses and 226Nm of torque and is fitted with fog lamps, LED rear lamps as well as 18 inch alloy wheels. It also come with a good line of safety features like its 4 wheel ABS system, EBD (Electronic Brake Distribution) and ESC (Electronic Stability Control). On top of that, it also gets 6 airbags with 2 in front, side as well as curtain ones too.

If you haven’t already know, the Kia Sorento is already selling well in other markets like the United States where it its high-performance powertrain coupled with its modern and technology inspired interiors have been so well received that they marked their 100,000th Sorento sold there. The milestone was the first for the company as it was the first model to breach the 100,000 mark after 1 year of launch.

SM Nasarudin also said that besides the highline cruiser, they are also expecting to leverage on the positive feedback they garnered at KLIMS on their 2 other new models which are expected to be part of their product line for 2011. The New 2011 Kia Optima and the highly anticipated 2011 Kia Forte Koup. 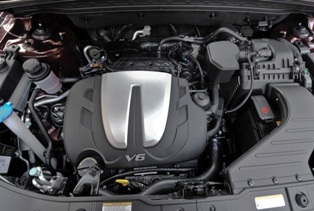