Hazrin Fazail Harron, the General Manager of the Product Planning Division of Proton Holdings Berhad said that the national car maker is looking to start selling hybrid models once everything planned out are carried out around the end of 2012. He said that the company, which is showing off some of their hybrid and electric vehicles at the currently going-on KLIMS (Kuala Lumpur International Motor Show) 2010 is currently working on the FTV (Fleet Test Vehicle) and once everything is carried out smoothly, they will be able to start rolling out their consumer market hybrid vehicle.

He said that at the moment, they have about 30 FTV prototypes where they will be sending it for testing for the government starting next year. The FTV project is a 4 stage development process where the company is using REEV (Range Extender Electric Vehicle) green technology and they are targeting to extend the driving range of its fully-charged batteries up to 1,000 kilometers.

Hazrin added that the company is looking to produce up to 200 prototypes on top of the current 20 in the later phases and that they have already installed 10 charging stations in and around the administration township in Putrajaya. He also said that the company had in June set up the Green Technology Department which was aimed to expedite the development of vehicles running on alternative fuel. Once the testing stages are completed, then the company would be able to start rolling out hybrid models of every model in their stable. 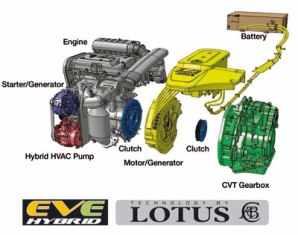