Korean automotive giant Hyundai was not left behind in joining the big boys at their home auto show recently when they unveiled their next generation of the FCEV sedan concept called the Blue2 Concept. This is part of the company’s ‘new thinking’ range of products and technologies and the Blue2 surely changes the entire driving experience altogether. So what does that mean? It means that the Blue2 which is also codenamed as HND-6 is very much the blueprint of future sedans for Hyundai and if everything goes according to plan, this would be how it would look like then.

Now the Blue2 is not called Blue Two instead it is read as Blue Square and it is as much a visionary product as much as it is revolutionary. Its name comes from a combination of the eco-brand ‘Blue Drive’ and the number ‘2’ which is the chemistry symbol for hydrogen (H2). This is because it is the first hydrogen powered sedan FCEV or Fuel Cell Electric Vehicle. The concept was unveiled together with their new and very much anticipated Sonata Hybrid which is the first gasoline-hybrid vehicle from the automaker.

According to Hyundai, the Blue2 will be their trump card to make it to the lead in the FCEV market although they have yet to reveal when it will go into production. The design philosophy of this concept adopts the ‘Intersected Flow’ ideology which means it incorporates the elements of innovation and dynamic design. At the moment, Hyundai has been heavily marketing their Fluidic Sculpture design language so whether or not the ‘Intersected Flow’ will be the replacement remains to be seen.

Just how powerful is the hydrogen fuel-cell? It comes with 120 horsepower and efficiency seemed to be on a record high, chalking in 34.9 kilometers per liter. To better its overall performance, they have also put in low-rolling-resistance rubbers to reduce drag. About the interiors, you will like the nice organic LED monitor and ultra-light tempered glass which are used for displaying information about the car. If that is not high-tech enough, they have also put in seat-mounted entertainment holders which are used to engage mobile devices like the Apple iPads or other mobile computers too. A cluster ionizer is also fitted so that you get fresh air to breathe when driving the Blue2, imagine that! 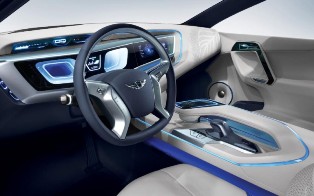 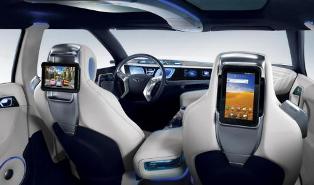