Skip to content
Auto.my – Car News & Classifieds
/
Hyundai shows their 2012 Veloster and how the future of coupes would be like

Korean automaker Hyundai recently showed their new sports coupe at the North American International Auto Show in Detroit in the form of the new 2012 Hyundai Veloster. This would be Hyundai’s take on how future coupes and hatchbacks would look like and the 3 door design in this one surely did not disappoint. The Veloster would also be platform to showcase their new technologies and better performance.

Under the hood, it gets a new engine and transmission in the form of the 1.6 liter Gamma inline-four powertrain that gets you up to 138 horses and 123 lb-ft of torque. This would be sufficient to move the car, according to Hyundai at about 40 miles per gallon. The engine is mated with a 6 speed manual transmission gearbox while optionally you could also get the 6 speed dual-clutch transmission gearbox, also a new technology from the company.

Set to revolutionize the coupe segment, this 3 door wonder looks as good as it comes. Apparently, the design of this car was inspired from a sports motorcycle with a motorcycle helmet visor appearance with its black A-pillars. The new Hyundai design language is also seen on hits new front grille as well as its LED headlights. Additionally you could also opt for a chrome grille surround, piano black highlights and a panoramic sunrrof.

Standard fittings in this one include 17 inch alloy wheels with 2 types of 18 inch wheels while at its rear, the Veloster gives you a nice looking dual centered chrome exhaust tail pipe. A push button start is also available with a sports bike inspired center stack and controls and all in the insides, you would like its metallic accents around it while they also give you alloy pedals while the steering wheel and the shift knob are leather wrapped.

As mentioned, the engine is one of Hyundai’s latest offering and this would be the smallest model to be fitted with the GDI (Gasoline Direct Injection) while it also comes equipped with the Dual Continuously Variable Valve Timing system. In terms of safety, the standards are included with ABS with Brake Assist, EBD and 6 airbags fitted. A 7 inch multi-function touch-screen display is provided for entertainment while they also give you Pandora Internet Radio which can be streamed from the iPhones and Blackberries. 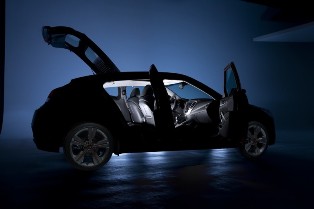 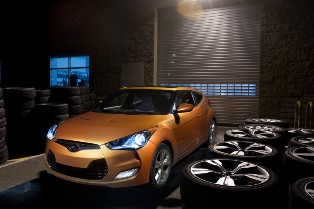