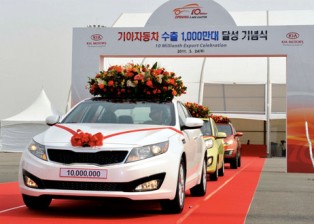 One of the 2 biggest automotive companies from South Korea, Kia Motors Corporation recently celebrated another milestone after its latest achievement of having exported its 10 millionth vehicle. It came in the form of the Snow White Pearl Optima Sedan model which is heading from Korea to the United States. This dates back to the first export from Kia 36 years ago when they first exported the Kia Brisa pick-up trucks in 1975. The market of destination then was Qatar.

On March 2005, Kia celebrated its 5 millionth export and reaching its 10 million mark was a remarkable achievement because while it took 30 years to reach 5 million, it only took 6 years to double up the figure. That is how dynamic the automotive market has been in the past few years. And that is just how dynamic Kia has been in their new marketing strategy in establishing their brand name overseas. So if you haven’t already noticed, Kia’s recent models have been more modern, more contemporary, more performance based and to some, more ‘European’. In the United States, a Kia was sold for USD1,400 at average in 1975 and now it is about USD12,000.

A ceremony was held in conjunction of the 100 million mark where the company celebrated at the Pyeongtaek Port before the vehicle climbs on towards the United States. Of course, this achievement would not be possible if not for the vast growth of its export market and the continuing effort by the company to create more brand presence in more markets. In the 1980s, Kia only exported to 10 countries while today their brand are already known brands in more than 156.

In Malaysia, Kia is marketed and assembled under the Naza-Kia umbrella. Kia has since moved away from its early reputation of making small vehicles what with their recent Sorento and Sportages which have already made impacts in their respective segments.

Their biggest export partner is North America with 4.27millions exported there while 2.45million have been sent to Europe while for the Asia and Pacific region, 880,000 units. Cumulatively, the Kia Picanto is the best exported models having 764,453 units migrated. The Rio and the Sorento follow suit with 747,554 and 656,446 units shipped respectively. 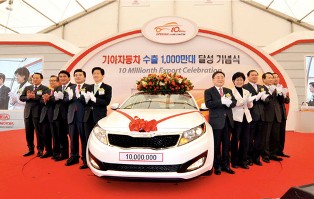