Skip to content
Auto.my – Car News & Classifieds
/
Mansory skins out the Lotus Evora and wraps it with carbon fiber

You would have recalled that Lotus showed off 5 of their new models recently which will be what the company has put in their pipeline for the next couple of years at least. In fact, Proton Group which owns Lotus have also showcased their own Lekir, Kasturi and others during the recent KLIMS (Kuala Lumpur International Motor Show) in PWTC which most people claimed to have drawn their inspiration from Lotus.

So with so many things heading the way of Lotus in the near future all circling its efforts of repositioning the brand to compete against the likes of Porsche and Ferrari, Lotus announced recently that they will be showcasing a Mansory designed Evora at the upcoming Geneva Motor Show. Now one must not be confused with another announcement by Lotus of a new facelift version for the Evora as that would be done by Lotus themselves. Mansory on the other hand is an independent aftermarket automotive tuning company which is primarily involved with modifying high-end cars where they have done some very significant changes to the Bentley Continental GT, the Ferrari 599 GTB Fiorano, the Aston Martin V8 Vantage and recently and very significantly, the Rolls Royce Ghost.

Having said that, what can you expect from Mansory when Lotus unveils their Evora at the upcoming show? Well, the answer is not much judging by the images. While one might expect Mansory to give the Evora a bit more extravagance, (remember the striking blue and gold blings on the Ghost?) they decided to keep the Evora with white. As with most reviewers and perhaps fans, Mansory decided to out-do themselves here by not touching too much on the body work but stresses on quality of drive instead.

This version was to showcase what are the opportunities that can be found in the aftermarket segment and they have drawn their experiences from their Aston Martin DB9 Cyrus and Bugatti Veyron Vincero makeovers and gave the Evora a new carbon-fiber skin and that is nearly as much as they have done. Well, Lotus made it extremely clear that this is not the facelift Evora because while they have commissioned Mansory for this which will be show at the upcoming show in Geneva, they are pretty happy with what Mansory had done which is to wrap around the car with carbon fiber making it lighter, stronger and better. But others might not be too overly impressed. 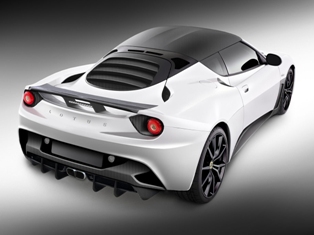