Mazda Motor Corporation recently announced that they have produced their 900,000th unit of their widely popular MX-5 sports car. Known also as the Mazda Roadster in its native country of Japan, the company announced that they reached their new milestone on February 4 and this was done after 21 years and 10 months since the MX-5 was first introduced. This means it dates back to April 1989.

To say the least, the MX-5 had already reached its own milestone when it became the ‘Best selling 2-seat sports car’ as certified by the Guinness World Records. And this was in May 2000 when its production hit 531,890. When Mazda continued its production to 700,000 units, Guinness had to update its record and then Mazda broke the record again when they rolled out their 800,000th unit. Of course, with their 900,000 mark, it seems that Guinness will have to change their data again.

According to the program manager of the current MX-G generation Mr Nobuhiro Yamamoto, the MX-5 has since gone through 2 complete product redesigns since it was first rolled out in 1989. At his post, he will try to continue to keep the MX-5 spirit among its fans because it is this type of support which drew the model to reach its new milestone.

A short trip back to the past would reveal that it was first known as the Miata when the world was introduced to this roadster back at the Chicago Auto Show 1989 which was quite a leap of faith when Bob Hall envisioned the project. His success in convincing the senior management of Mazda that there would be a worldwide demand for a roadster that handles well meant that the model would go on to have its own limited editions, spin-offs, awards and such which brings it now to the 900,000 mark, just a bit shy of 1 million. And that of course is the target as according to Seita Kanai, the senior managing executive officer of Mazda Motor Corporation, they are well committed into evolving this model where they are keen to continue its tradition of a fun-to-drive car while maintaining the safety and environmental features. Naturally, the MX-5 has its own set of following and keeping close to its original character will ensure its fans are happy and stay with the model until its 1 millionth mark. 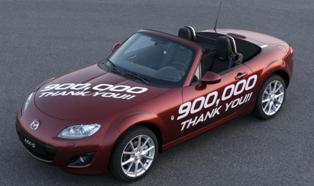 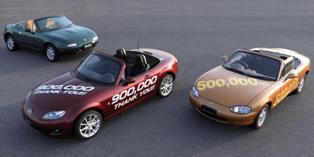