Mazda to show the Minagi concept in Geneva

Japanese automaker Mazda recently released images of their Mazda Minagi concept which they are planning to put on show in the upcoming Geneva Motor Show 2011 which is set to take place in March 1-13. This new modern looking compact crossover SUV concept is one of the models that comes with the new KODO or Soul of Motion design language as with most new Mazda models. As a preview to its new product fleet, you can surely expect to see more of the KODO DNA with Mazda’s new roll outs soon.

According to Mazda, this concept would be the base which the new generation Mazda CX5 will be built upon and it is set to compete against the likes of the Volkswagen Tiguan while reviewers are claiming that once the Minagi goes into production, it could also go against the likes of the more premium players like the BMW X3. Now if you haven’t already know, the KODO design language was first put up on the 2010 Shinari concept and the Minagi typically is the crossover version of the somewhat peculiar looking model.

Speculations are circling around too that the Minagi could be the new design model for the Mazda Tribute which has a long overdue for an update, first spoke about back in the beginning of 2007 and as mentioned, it might not keep the Tribute name and would most likely be the CX-5. As with the demands of the market these days, fuel efficiency is one of the major elements where the Minagi could come with a partial all-wheel drive system of which the front wheels will be the primary mover with the rear rubbers activating when more traction is needed. It is also reported that they will be putting up an array of different engine choices with the SKYACTIV-G being a direct injection gasoline engine, a SKYACTIV-D being the diesel engine, an automatic transmission model called the SKYACTIV-Drive while quite obviously, SKYACTIV-MT is the manual transmission. 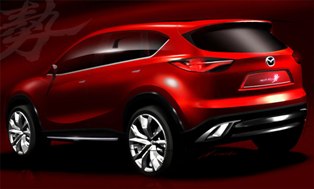