In conjunction with the upcoming Summer Olympics in London, the iconic Mini has come out with a special edition and this will be derived through the Mini Rocketman Concept model that was seen not too long ago.

Despite being owned by German automotive giant BMW, it seems that they will be pulling in the British roots on this one where it will come with the national flag colours of the Union Jack.

The designers have used the colours for the exteriors and the interiors and to make it look more interesting, they have also put some white polished bits around the 18 inch alloy wheels. The Union Jack’s motif is placed onto the roof of the car while on the inside, you will also in light of the summer games, they have also put in some miniature figures of basketball players as well. The door panel is wrapped with a really cool looking fabric that has the names of cities that had hosted the Olympics previously.

All around the car, you will see the prominent colours being displayed while the matte Porcelain White paintwork are also placed on the boot opener, the mirror caps and on other spots too and the front grille is given a red coloured dressing. 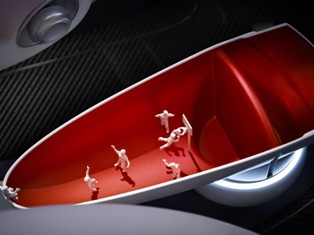 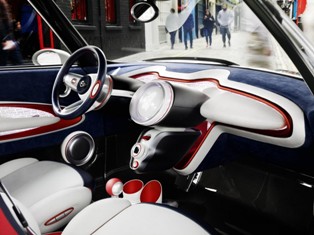