The Mini Paceman Concept was reported to be planned for show at the Detroit Motor Show and presumably, Mini did not disappoint when the rolled off the covers on their new concept which according to BMW, this would be the platform which will their eighth production vehicle will be built upon. Typically, the Paceman Concept looks very much the Countryman, albeit a 2 door model with a more aerodynamic roof.

If you are looking for a Mini which exudes sportiness in all its glory, encompassing the Roadster and the Cooper S, then this could well be the best choice because it looks every bit the lifestyle model. This is, according to the company the first Sports Activity Coupe in the market’s premium small segment. After all, Mini and its reputation of building vehicles with dynamic capability and individual design will continue its legacy with this one with a new innovative body concept put in. Naturally, you will like its Countryman features combined with the style and persona of a coupe.

At the show, Mini did not confirm if the Paceman could well make it to production although this would be a very much welcomed decision, but it could be the new platform for future designs from the brand. Under the hood, the Paceman is powered up with Mini’s most powerful engine in its product line, the 1.6 liter, 16 valve, 4 cylinder twin-scroll turbocharged engine which is also the same drivetrain found in the Mini John Cooper Works version. This gets you up to 211 horsepower and a maximum torque of 260Nm. It also comes with Mini’s new ALL4 permanent all-wheel-drive system which is a technology using an electromagnetic centre differential positioned that manages the distribution of power between the axles in front and in the rear.

In terms of design, the Paceman is easily recognizable from the front where they have now put in large headlights with chrome surrounds with 19 inch front wheels giving it a more aggressive persona but the most distinctive feature of this concept perhaps is with its coupe-ness and its long sloping roofline which seemed to extend all the way to the back. Somehow, one would expect the Paceman to make it into production, in fact one would surely be excited of its prospects because despite looking somewhat similar, it looks like the most good-looking Mini ever. 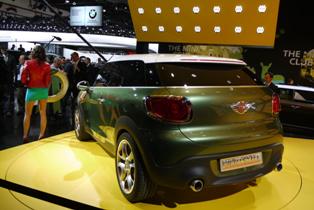