Now this might be something really cool. Mini will be showcasing their MINI Rocketman Concept at the upcoming March bound Geneva Motor Show and this really epitomizes the name sake as it is really quite a ‘mini’ car. In fact, it has been labeled as the micro Mini. Think about that. Interesting don’t you think? In fact, some seemed to think that this concept is very much unorthodox to come from Mini over the years.

Measuring at 3.419 metres long and 1,907 mm wide and 1,398 mm tall, the Rocketman Concept somehow reminds one of the 1959 original which was then measured only 3.05 meters. Judging by the images, it looked so very futuristic while they have managed to keep the Mini’s DNA in tact. It uses the same rounded headlights which is found on the hatchback version. In fact this looks like one of those cars coming straight out from a Transformers cum GI Joe movie as after all it is what Mini believe to be how the future is going to be like with cities getting more crowded and space getting scarce.

Mini calls this a ‘3+1’ seater which means that while it is capable of sitting 4 people comfortably it would be ideal for 3 while 2 would be totally luxurious. Again, we must stress that Mini is more a bachelor’s car than a family one, what more if it is a smaller version like this. Apparently this would showcase what the Mini mobile lifestyle all about which would be ideal for future cities.

Future-forward carbon construction, with a striking surface structure visible throughout the car, forms the basis of a design that allows for unprecedented flexibility in design options. Recent development allows MINI to maintain modern safety standards while delivering design freedom to engineers and draftsman that make for an improbably sharp looking vision of the future.

Some of the cool stuff that you can expect from this model is with the doors which instead of opening like wing spans, it slides forward which gives you more space for getting in which is one solution for those getting into a 2 door car towards the back seat as well as when parking in tight spaces. 18 inch wheels are standard here with a solid Union Jack embossed glass roof. LED is used for the cockpit which comes different colour schemes that goes accordingly to what the setting is. Now that’s just super-cool! 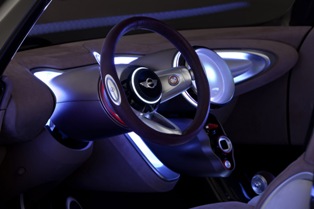