The 2 door convertible model is a widely anticipated model which is known for its style and sportiness where it is also known for its luxurious elements with state of the art technology. The 308 would be the ideal model to compete in the cabriolet coupe market of Malaysia following the recent 207 which is the market leader currently. SM Nasaruddin SM Nasimuddin, the Chief Executive Officer of Nasim said that Peugeot has been renowned for its coupe cabriolet cars where it was the first automaker to launch such a model back in the 1930s. Since then, they have been cementing their place as the premium makers in the segment.

Nasim reported that the 308 would be sold around the RM200k bracket where the launch will include showcasing the new model in Bangsar Shopping Center from January 7 to the 9th. Among those you can expect from this convertible is a 2 piece electrically retractable roof which is quick and efficient, taking only 20 seconds to fold. It also comes with LED lights for the rear, nice looking 18 inch alloy wheels, as well as dynamic directional xenon lamps.

Under the hood, you will get the 1.6 liter twin scroll turbo engine with direct injection paired with a 6 speed automatic transmission gearbox with Triptonic sytem that gets you up to 156 horses and 240 Nm of torque. The THP 156 Prince engine can also be powered up through a Sports mode feature as well. In terms of safety, you will get the world’s first head airbags fitted onto the seat among the 6 airbags included. 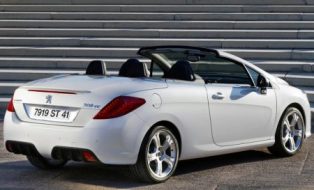