As reported, Perodua yesterday launched the new Perodua Myvi with much fanfare and they are heading towards improving their position as the best selling model in the country.
The Myvi, if you haven’t already know has been around since 2005 and has since sold almost half a million units. It got its first facelift in 2008 and now, a new generation arrives.

First impression of the new Myvi is that it is now an A-MPC (advanced multi-purpose compact) car while the outgoing model is an MPC (multi-purpose compact) which means that it is now more high-tech, looks way more sleeker and has better features. The performance of the vehicle has also been improved. There will be a 1.5 liter later but for now, it still comes with the same 1.3 engine with some minor adjustments. The dashboard has been given a total revamp which now comes with a center console mounted automatic gear knob. Otherwise, the dimensions are pretty much similar.

You will like that it now looks way more spacious than before with the futuristic design and will now come in 6 versions. The Elegance model gets you a built in touch screen navigation system, which is very cool. The basic model starts at RM43,900 while the top of the range (Elegance EZE AT) goes for RM57,400. 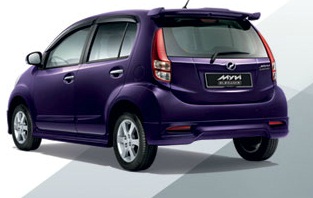