Surely you would have remembered our old Nissan Sunny that used to come with those ‘absorber bumpers’ and very fuel efficient in the 80s. If you are lucky then you could still spot one or two of them around town these days but otherwise, the old Sunny has since been replaced with the Sentra and if you look at what the Sentra is these days, surely the old traditional model had come a long way hasn’t it?

But if you are one who is into the retro and stuff like that, the Sunny gets a new breathe of life (or only its name) and is now available in China. The new Sunny is the result of the joint-venture project between Nissan and Dongfeng Motor Company where it will be going with different personas in other markets. Of course, if you haven’t already know, in Malaysia, it goes with the name of Sentra while in other markets the Sunny is also known as Laurel, Pulsar, Almera and Tsuru.

One thing for sure, it will maintain its old brand image of a fuel economical car, where the Sunny is set to continue with. It comes with a 1.5 liter HR15DE engine paired with the XTronic CVT (Continuously Variable Transmission) with auxiliary transmission. Targeted in China for the mid-30s family man, it also comes with MacPherson struts in front while its rear is fitted with a torsion beam suspension. It will be sold for between RMB82.8k to RMB112.8k in China, the new Sunny will be roled out through its Guangzhou’s Huadu plant which is part of the Nissan-DongFeng partnership.

Nissan showed the car at the 8th China (Guangzhou) International Automobile Exhibition and announced that they will start selling the Sunny for the Chinese market next January. After that they will start rolling out in other markets(170 is being named). The Sunny first came into China back in 2003 under the manufacturing partnership and since then has established itself very well in the market which is why they have no plans to change the name whatsoever. Back in 2003, the partnership resulted in the selling of 94,000 units and since then it has been widely successful with the figures jumping to 756,000 units of passenger and light commercial vehicles sold through DFL. 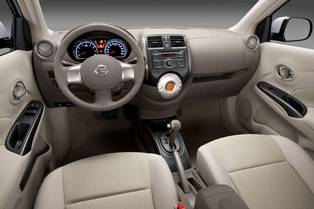