South Korea’s biggest car maker Hyundai has unveiled images of their i40 wagon which will be put on show in the upcoming Geneva Motor Show next month. This follow the previous images which was circulating around for a while now. The i40 would be Hyundai’s first midsize model which will be made specifically for Europe where a sedan version will be following suit later this year after the launch.

The i40 is also moulded using the new ‘fluidic sculpture’ design language and is engineered through its Germany’s R&D plant in Russelsheim which is where you get the pure European DNA. It is fitted with the 2 jewel looking headlights on its hexagonal grille and also new powertrains made with the European drivers in mind.

Apart from that, they have also included some new ‘firsts’ here including a heated steering wheel, an active de-misting system which detects and clears the mists on the windscreens automatically as well as a heated and reclining front and rear seats. This would also mark the launch of the company’s ‘New Thinking. New Possibilities’ tagline. According to the Senior Vice President and COO of Hyundai Motor Europe, Allan Rushforth the i40 is evidently their new direction forward under the new slogan which offers more for less to their customers, a fundamental principle of the company.

So with the new D-segment vehicle, what is under the hood here? Hyundai said that there will be a few powertrains available including the codenamed UII which emits only 113g/km of CO2 emissions. This typically is a 1.7 liter diesel engine, which is currently the in-demand engines in Europe. It will also come with the company’s Five Year Triple Care which gives their customers a 5 year unlimited mileage warranty as well as roadside assistance and health checks, all for a 5 year duration. This package have been widely successful for the company and so far no other competitors are coming close to what they can offer.

Apart from the new i40, Hyundai will also be showing off their new Veloster coupe, a 1+2 door model while they are also planning to showcase their Hyundai Curb Concept which were also displayed at the recent North American International Auto Show in Detroit last month. 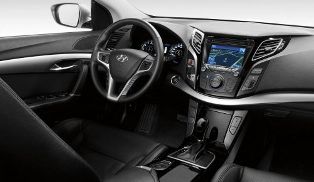 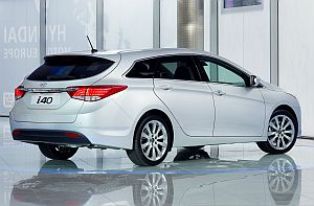