Skip to content
Auto.my – Car News & Classifieds
/
Nissan to show off their new Esflow. It is the Leaf with a sporty persona

Following the success and response to the Nissan Leaf, the Japanese car giant has unveiled yet another version for the EV (Electric Vehicle). Behold, the Nissan Esflow and this would be the sporty version of the highly acclaimed Leaf and that should get people buzzing with excitement. It is still in its concept but if it gets to production, Nissan can be almost sure to add another accolade to their cabinet which now has the European Car of the Year award for the Leaf.

According to Nissan, they will be showing off the Esflow at the upcoming Geneva Motor Show next month which looks a bit like the 370Z and if it is how the future is going to be like and drawing the technology from Leaf, they are banking on the concept that fun driving today could well be transferred to the future. This is typically a 2 seater vehicle that comes with a rear wheel drive system and being sporty as it is, it is very fast, taking less than 5 seconds to hit the century mark.

Like the revolutionary vehicles these days, it is powered up with 2 electric motors which are fitted onto the top axis of the rear wheels to rotate each of the wheels which consequentially controls the handling and efficiency to its optimum. The company also added that the same laminated lithium-ion battery packs fitted in the Leaf is used in this one where it could get you up to a maximum of 240km in a single charge. The difference here though is the location of the battery packs which are mounted onto its front and rear wheels.

On top of that, they also used roll bars to fit into the structure behind the seats for better safety, particularly in accidents involving the car to roll over. Taking the cue from the fighter jet, they have adopted the unobstructed view stand with this one. David P Reuter, the vice president of communications for Nissan North America said that this vehicle was designed to show the world how the future of zero-emissions sports cars would look like and if that is really the case, then it would surely be an exciting time. The Esflow will be used to gauge the consumer’s reaction and if it is going to be as overwhelming as the Leaf, then it might just be coming around pretty soon. 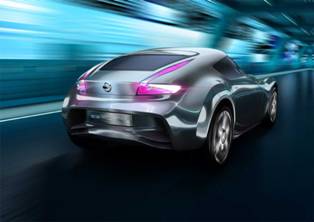