Following the revealing of the new livery and engines of the various Formula 1 teams, more and more teams are starting to show off their new contenders as well. In fact, Scuderia Ferrari was one of the earliest teams to show off their new models codenamed F150 where they were also involved with the other teams in Valencia’s Ricardo Tormo Circuit in Spain. Now, if you have forgotten Ferrari’s Fernando Alonso almost nearly won the driver’s championship last season which went down the wire but lost out to Red Bull’s Sebastien Vettel. The team will not be changing its driver line up with Felipe Massa and Alonso all set to kick off their challenge this year with the F150.

As a matter of fact, or pretty much expectedly, Ferrari has no intention of changing much to its livery on the car as they usually let the results do the talking. Most of the ‘usual suspects’ of sponsors are still with them like AMD, Acer, Shell and Santander. So apart from the new aerodynamics and new tyre manufacturers, (Pirelli instead of Bridgestone if you haven’t already know), there aren’t much to shout about on their new look, so to speak.

Another notable change also is in the rear wing where they have now put the Italian flag there. Well, this is part of the whole branding exercise which the engine named F150 were intended to signify the 150th anniversary of Italy’s unification. They have also decided to remove their old ‘bar code’ which was criticized for ‘insinuating’ a cigarette brand sponsor closely related to the Prancing Horse’s Formula 1 team previously. They have also given the front a bit of elevation which was made with an intention for better airflow with the side-pods given a stronger indention. KERS have been adopted which is the word of the day for most other teams.

Apart from the new tyre manufacturers in place, other changes in this 57th single-seater racing car from Ferrari include the removal of the double diffuser and the blown rear wing, which have since been banned and replaced with a hydraulically controlled adjustable rear wing, a new rear suspension design, a redesigned braking system resulted from a collaboration with Brembo and a modified front chassis. 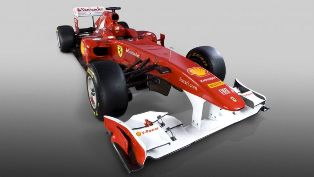 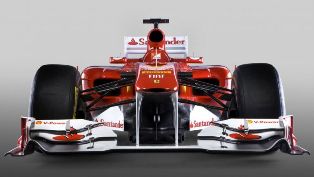 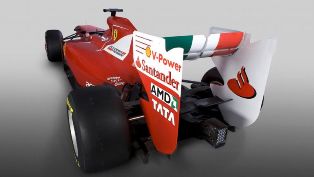