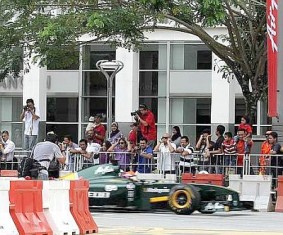 Datuk Seri Tony Fernandes, the team principal of Team Lotus is looking forward to the weekend when the team races in its ‘home’ race. In fact, so confident is he that he has made a claim which might annoy his fellow competitors. Team Lotus (or 1Malaysia Racing Team) is up on the track in Sepang this weekend where the Formula 1 World Championships circus comes to Malaysia for its second round after the season kicked off in Melbourne 2 weeks ago. Team Lotus is the Malaysian team while the Mercedes F1 team is sponsored by Petronas with Lotus Renault, which is owned by Proton too are all claiming Sepang to be their home race.

Fernandes claims that there is only one team that is truly Malaysian with the Malaysian blood running deep in its roots as compared to the other two. Team Lotus kicked start the frenzy of the Malaysian Grand Prix when they rolled out onto the streets of Putrajaya last week and Fernandes said that the team had ‘returned home’ and despite 3 teams claiming to have links with Malaysia, it is the 1Malaysia Racing Team which is truly Malaysian due to its commitment of having Malaysians contributing at every level of the team.

Fernandes said that having achieved what they have done in only 18 months is a remarkable achievement and that they have done so with hardwork and dedication and not through ‘buying success through stickers on a car’, a comment seemed to be hitting out on the other 2 teams. They will be competing this year using the T128 car and they are looking to better their position last year when they raced using the Cosworth engines. They are looking to compete in the midfield areas but in the first race, they only managed to finish with one driver while the other did not finish.

Mark Gascoyne, the Chief Technical Officer at Team Lotus is confident of a good showing in Sepang as the team believes that the track temperatures here would be more suitable as compared to Australia. In fact Gascoyne said that the team is highly charged up for the home fans support and that they will be going all out to put out a good show.