Since the launch of the Chevrolet Cruze, there has been very positive reviews and response from the drivers in Malaysia. After all it seemed a decent car that looks good, drive good and very much value for money too. So Naza Quest, the distributor of the Cruze in Malaysia is rolling out the Chevrolet Cruze Special Edition and if you like what you see, you have to make it fast as this is strictly a limited edition model where only 300 units will be made. This model was designed and drew its inspiration from the WTCC Cruze and that means you get the rally inspired model that won the Manufacturer’s title and the Driver’s title in the 2010 WTCC driven by Yvan Muller.

The Special Edition is designed based on the standard Chevrolet Cruze 1.8 LT and this is where you get nicer designed body and bigger tires. According to Naza Quest, the Special Edition will be sold and available “from just RM97,888″ which is not including of OTR and insurance, so you can expect it to be a bit more than that. Still, it is quite a worth buy to a large extent. One thing for sure, it has the looks of a more aggressive car as compared to the stock version and this is where the wheels play an important part. Well, with 18 inch wheels, the Falken tyres will be used instead of the 16 inch ones in the standard model. Under the hood though, there are no changes as they are using the same 1.8 liter Ecotec engine paired with a 6 speed automatic drivetrain transmission gearbox.

The Special Edition Cruze comes with a custom bodykit where you will surely like its more aggressive looks especially with the new designed front bumper. It is focused on the air intakes, the side skirts and a rear bumper which is designed based on the diffuser traits. On top of that, it also comes with new door visors, an LED wing mirror repeaters as well as a bootlid spoiler while they have also put in 2 cutouts for its exhaust pipes. You also get leather seats with red stitching inside the SE while an illumaniated Cruze logo scuff plates are also included. 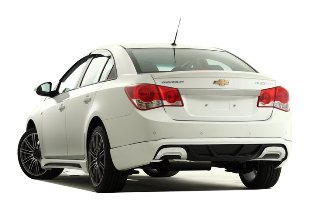