If you were the few (or the many) who went to the recent KLIMS (Kuala Lumpur International Motor Show), you would surely remember that you were welcomed by the second national car maker Perodua at the entrance and would surely remember that you saw first hand for yourself what the future might be like for Perodua. Something really ‘different’ so to speak as they put onto the podium the Bezza.

This was supposedly the next generation prototype model to have come out from Perodua’s efforts and it surely is something truly different and away from what it is known for, the compact car maker. If you spent enough time at their booth, you might also have been drawn to join the contest to name their new eco-friendly model and like it or not, this prototype surely got everyone buzzing with excitement. In case you are wondering, no this is not the new Myvi. To clarify this, it was that yellow ‘melted’ model which was supposed to be the new Myvi set to be launched next year.

Naturally, the Bezza (named after the Malay word ‘Beza’ which means different) is a bigger sedan model and would surely fit those of you who might have been put off by Perodua’s so-called ‘smaller’ cars and with this, they might just garner a bigger chunk of the lucrative sedan market as it is bigger and would be more appropriate for longer drives.

Muhammad Zamren Musa is the chief designer for the Bezza and this model was made purely by a Malaysian team. It epitomizes the very nature of Perodua and their brand image of compact car makers where, staying true to its roots, it is made with the same concept of what Perodua cars are known for, spacious on the inside but looks compact on the outside. They call it a mobile living space and this will most likely be the future design language of Perodua cars. Perhaps there are some features of Toyota Prius found around the car (after all, Toyota owns Daihatsu and it is only natural that Perodua might get carried away in this), it also comes with a sliding door and swivel front seats, that’s one of the cool stuff. Otherwise, the other parts of the car are articulately designed to showcase the future with a modernistic persona. With that, the Bezza surely is the way forward and might just be how it is going to be. 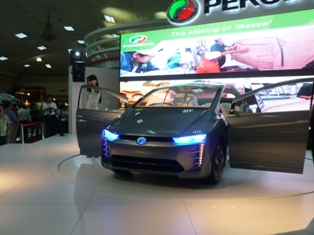 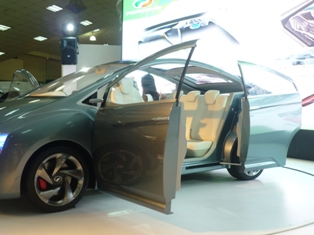