Skip to content
Auto.my – Car News & Classifieds
/
Plenty to see for everyone at KL Motor Show

If you haven’t already know, and perhaps have been living somewhere far, far away, the current main event happening around town is the Kuala Lumpur International Motor Show 2010 or better known as KLIMS 2010. Head on down to Putra World Trade Center now as the show has already been going on since December 3 and will conclude on the 12th. Entry fee is RM15 each for adults while kids above 12 years old will be charged RM5 each. For weekends, adults need to pay RM20 while kids are the same.

You can also bring your spouse and up to 5 kids for a family ticket of RM30 for weekdays and RM40 for weekends. Students in uniform and with their student cards will be entitled to enter at RM5 only. Perhaps the most anticipated vehicles to see there are the electric and hybrid models which were promised prior to the show particularly from our own car makers, Proton and Perodua. Proton of course have put on show its hybrid and electric models including the Exora MPV hybrid, the EMAS (which was made popular at the Geneva Motor Show) and the Saga hybrid. Perodua on the other hand would not lose out as they put on show their concept car, the Bezza (inspired from the word ‘Beza’ which in Bahasa Malaysia means different).

The show basically carries a green technology theme and many brands have used this event to launch their new models. Nissan rolled out their Teana while Honda launched their highly anticipated Insight hybrid which goes on sale for RM98,000. This means the model is the cheapest model in its segment. Nissan also showed off their new March, the very nice looking SUV, Juke while Honda also showcased their Civic Type R, Euro version and the CR-Z.

Naza Motors showed their Ferrari’s while their subsidiary launched the Kia Sorento at the show while its Chevrolet subsidiary showed off their range of models including their recently launched Cruze. They also brought the Camaro SS which was used as the car version of Transformers’ Bumblebee. A gigantic model of the ‘movie star’ was also put on show together with the Batmobile. Speaking of models, head on down to PWTC and feast your eyes on the car models, the models with the cars and the cars with their models. 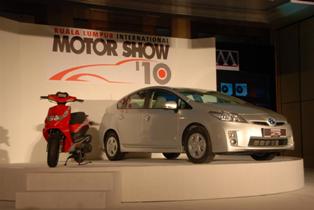 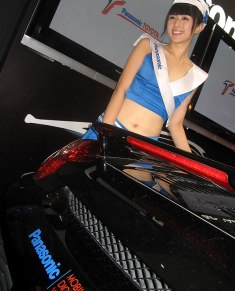