The new Porsche 918 RSR is quite a serious wonder when it was put on show at the recent Detroit Show. It is powered up with a 767 horsepower engine which is the same one fitted n the 911 GT3 R Hybrid version of which 563 horses are powered up via its 6.2 liter V8 engine complemented by its 75kilowatts power on each of its wheel up front.

This hybrid model was developed through Dr. Ing. h.c. F. Porsche AG based in Stuttgart where they used the flywheel accumulator, made popular by the 911 GT3 R Hybrid also known as the ‘Race Lab’. The 918 version has its engine mounted upstream at the rear axle where its racing transmission is connected to its mid-engine location. This concept was transferred from the RS Spyder model where the paddle shifters controls the 6 speed transmission gearbox.

Without much needed to be said, this model is typically a blend of technology between the ‘Race Lab’ 911 GT3 R Hybrid and the design language of the 918 Spyder. Naturally, the 918 is the latter’s version made for racing in the circuits. All 3 models come through with the ‘Porsche Intelligent Performance’ technology which has been pretty well known since then for its high reliability as well as fuel efficiency without compromising on the performance.

The 918 was designed based on the ‘form follows function’ concept and hence you will see that it gets some very aggressive body parts here like the muscle-inspired wheel arches, the pulpit designed cockpit and the nice looking air-intakes. Contrasting colour schemes are also put in place like its orange brake callipers and stripes giving the hybrid persona a boost and enhancement.

The body of the 918 RSR is made from CFRP (carbon-fiber reinforced plastic) which means this car is very light and would be ideal for racing and comes with 19″ wheel racing slick tires that gets you more stability and handling. There are not much to shout about inside the car because of its racing nature as Porsche goes with a minimalist concept. Naturally, there is only a single seat in front with a flywheel second seat. This flywheel is actually an electric motor where the power can be channeled by demand of the driver to boost additional power to the front wheels when needed. 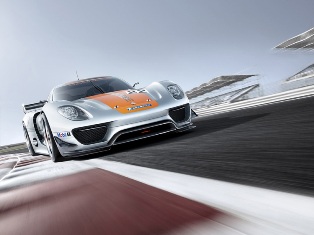 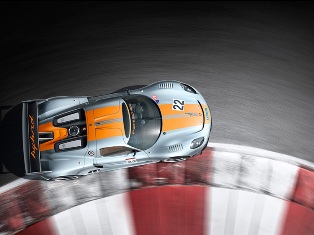 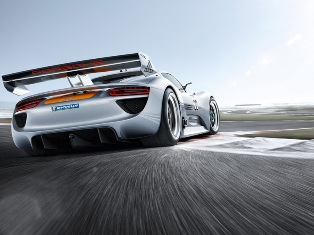 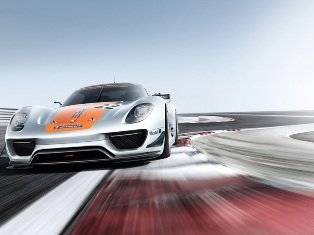