A new Prius was revealed at the currently on-going North American Motor Show in Detroit where Toyota showed off their new 2012 Prius V to add on to its current product line up. Since its launch, the Prius has been welcomed with open arms and has since rolled out almost one million units in the United States alone while other markets are slowly but steadily raking in the figures for Toyota as well.

The new addition comes with all that the Prius is known for and now comes with more space in terms of cargo and legroom. It has 38 inches more of leg room in the rear seats and in terms of size, the V is 5 inches longer. As it is still powered up by the same engine, namely the 1.8 liter 4 cylinder hybrid power system, the longer and bigger body means that it might not be as fuel efficient as the original model. Where the standard Prius gets you up to 50 miles per gallon, this one brings you to 42.

The V actually stands for ‘versatility’ and comes with mostly the same structure and system of the stock Prius and Toyota’s trademark Hybrid Synergy Drive system. As mentioned, with more than 50% of interior cargo space, this might be the very reason many would be opting for the V pretty soon. After all, a spacious, hybrid and tested and proven vehicle will surely go a long way.

The space inside the car is designed as such to sit 5 passengers comfortably with a 60/40 split rear seats foldable while the front passenger seat can be folded flat. A resin made Panoramic View moonroof is also included in this one, a first from Toyota. They have also included a Push Button Start system while the other similar features with the standard Prius here include HAC (Hill Assist Control) and a rear camera. Customers could also choose additional equipments like the Advanced Parking Guidance System, the Dynamic Radar Cruise Control with PCS (Pre-Collision system) as well as LED headlights. 7 airbags are fitted in the V with ABS, EBD, Traction Control, Brake assist and VSC are the standard safety features here. Another first for the V is the Entune Multimedia system which integrates the mobile phone and other mobile devices to the in-car entertainment and navigation features. 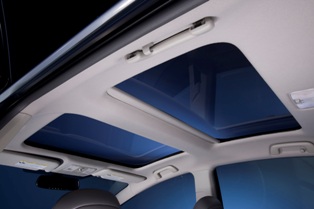 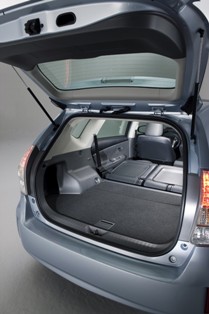 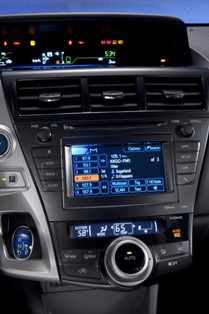 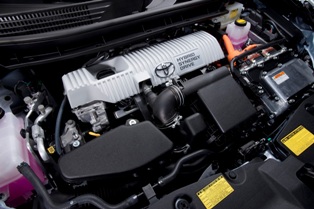