Among the many Proton models put on display at the KLIMS (Kuala Lumpur International Motor Show)2010 is the Proton Satria Neo R3 Concept. Perhaps attracting only the racing enthusiast, this model was put on show to demonstrate the company’s ability to make the ultimate performance car amidst their other models like the hybrids and their electric vehicles.

For starters, the R3 (Race, Rally, Research) will surely not hold anything back with anything they touch on and with this, they have beefed up the Campro CPS engine in the standard Satria Neo and gave you a whooping 200 horsepower and 250Nm of torque engine. They have also included a turbocharger into the 1.6 liter engine while putting in forged pistons, performance enhancing camshafts and cylinder heads, and a power management computer system.

On top of that, they have also given the car a makeover with a new exhaust system as well. If you followed the developments of the Neo under R3, they had once made the the Proton Satria Neo R3 Lotus Racing which was about RM115k and a limited edition model but they only pushed it to only 145 horses. With 55 horses more, this would surely be a more enticing option for speed buffs. Well, whichever the case, to compare with the stock version, you only get 125 horses.

The Neo R3 Concept comes with the AP Racing brake package which is the same one you get on the Lotus Racing version where you get 4 pot calipers, performance brake pads and the 295mm floating discs. The wheels here are a bit of a let down though where they give you 15 inch, 195/50 Bridgestone Potenza RE55s tyres. The Lotus version came with 16 inch Advanti alloys and 205/45 Bridgestone Adrenalin tyres.

In terms of its outlook, this car surely has it all with the black and yellow stripe running through while they also gave you the carbon fiber bonnet, body kit and some others ‘borrowed’ from the Lotus sibling. As this is a concept (and perhaps might go into production) they also ensure that comfort and class come together with Nappa and Alcantara leather inside the cabin with Recaro sports seats fitted with Sparco harnesses as well. Whether or not it goes into production, the company is still keeping mum so at the moment, this is still eye candy for everyone. 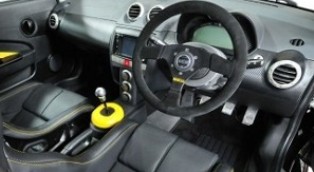