National car maker Proton has rolled out its first batch of its EV (Electric Vehicle) and they have been presented to the government for evaluation.

The batch included 3 Proton Saga EVs and 5 Exora REEV (Range Extender Electric Vehicle) where the feedback from the evaluation would be considered before they start mass producing them. This is the first phase of the Fleet Test Vehicle Progamme which is conducted between Proton, the Ministry of Energy, Green Technology and Water and the Minister of International Trade and Industry. The vehicles were presented to the Prime Minister Datuk Seri Najib Tun Razak and witnessed by Tun Dr Mahathir Mohamad, the former Prime Minister. 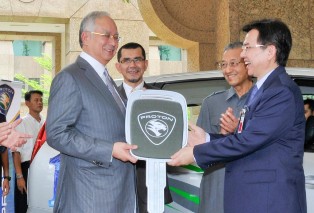