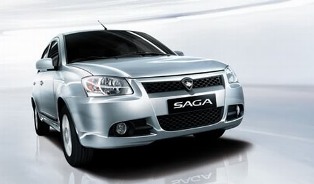 Proton Holdings Berhad put on show their facelifted model of the 2011 Proton Saga at the currently going on Thai Motor Expo 2010. This is seen very much as the preview of what you can expect in the KLIMS (Kuala Lumpur International Motor Show) 2010 where you will be feasted with Proton’s lineup of hybrids and electric vehicles.

In the new design, the Saga is given quite lot of changes in front where they have put in new head lights, a nicer looking bumper and the indicator lights too have been shifted about. On top of that, they have also put in indicator lights on its side mirrors, which has been quite the trend these days. At the back of the car, they have now put in LED lighting while fitting in a spoiler on top of the boot door and subsequently shifting the emblem towards a side.

Inside the car, they have given you a new USB and Aux enabled sound system powered up by Clarion where you can also control them via the buttons mounted on the steering wheel. This is the same concept fitted into the Satria Neo. For the Thailand market, Proton will be bringing in 4 colours namely Genetic Silver, Solid White and Tranquility Black and joining in the family is the Blue Rock, a new colour. In terms of engine, it is pretty much the same with no changes to its 93 horsepower engine. The model sold there will also come with power window for the rear windows although this has yet to be confirmed for our market. It also comes with a new alloy wheels design with rubbers fitted in being the 185/60R14 series.