Now this is quite an interesting piece of news. Reported in one of the local dailies, the government has decided that their top officials will no longer be using the usually problem-full Proton Perdana V6 which has been controversially reported recently over its high maintenance costs and expensive spare parts. The Proton Perdana will now be replaced by the Nissan Fuga but will only be used by the government and will not be made available for the public, not like the Perdana V6 previously.

Well, so what is this Fuga all about you might be asking. For starters, it is quite a powerful machine where they will be bringing in the 2.5 liter engine version which is designed and developed based on the Nissan Skyline. Strike a note yet? Well, outside of Japan, the Nissan Fuga is known as Infiniti M and the current version gets you up to 220 horses at least on its 2.5 liter V6 engine.

The Fuga based model will be brought in by national car maker Proton and news is that they have no plans to do any sort of ‘rebadging’ for the general public as they will first ship in 150 units to replace the current Perdana fleet used by the top government officials (most likely ministers) and will only be exclusively used by them. Proton will however gauge the response and if it is good, then they might just do an ‘Inspira’ out of this. But for a start, there are still no plans as such.

At press time, there are still no mention of what Proton will name this model or which body design it will come with but this is the first collaboration between the national carmaker with Japan’s Nissan. According to the report, the result of this collaboration might spin off to some models to be manufactured off the Tanjung Malim plant belonging to Proton although Nissan already has their own plant under the Tan Chong group in Serendah which produces the Grand Livina, the Sylphy and the recently launched Nissan Teana. Having said that, one must be aware that the Fuga is already quite a popular car in other markets and if it makes its way to the public here, then perhaps a more affordable Skyline could be in the cards for us? 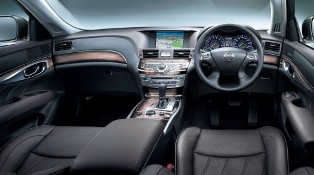