Skip to content
Auto.my – Car News & Classifieds
/
Renault Captur Concept – Geneva will have something to be excited about

with most motor shows, concept cars are a common sight. So French car maker Renault will be coming up with their own Captur concept which some deemed to be their answer of the widely popular Nissan Juke. After all, Nissan and Renault have been working together in their efforts to roll out eco-friendly vehicles in recent years and the Juke is one of them.
And now Renault will be following their last year’s DeZir with the Captur Concept which typically is some sort of a crossover between a four-door coupe and a sports activity vehicle or along that line. Nissan did that with their Juke and the Rogue so it is only normal that their partner follow suit. This is where Renault will be showing off their new design language of the future although there are some things here which will not be included if it gets into production.
For starters, there would be the 22 inch wheels which looks too futuristic for this cause as well as the interiors which also seemed to be too overly modern. Under the hood, it is powered up with the company’s own Energy dCi 160 Twin Turbo engine that gets you up to 160 horses on its dual-clutch transmission gearbox.

If you remembered, Renault’s new brand identity was first seen at the Frankfurt show 2 years ago which was later on translated onto the DeZir and now with the same simple style they have also put it into the Captur. According to Laurens van den Acker, the director of design of Renault, they are positioning the Captur as a ‘fun and sporty crossover’ which will be an ideal choice for the young couple. It has the same frontal identity as the ones found in the DeZir so to a certain extent it might look somewhat familiar.

On the interiors, you get an orange theme which is designed to be occupant-friendly. They create the illusion that the front seats are floating because they are attached to the center console. Nice touch that one. They have also put in the Visio-system for the first time here where a camera is mounted in front to help the driver with driving using Augmented Reality (AR) technology. Now this is just something really cool. So let’s hope it is. 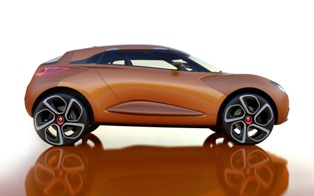 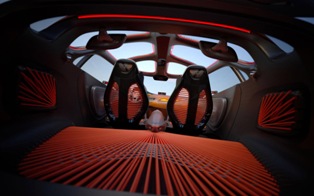 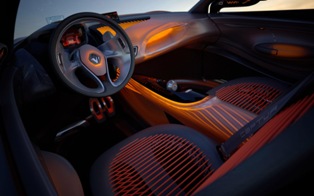 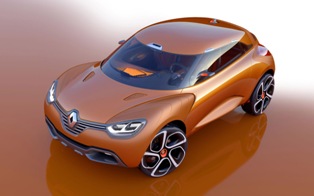