Seen at the highly anticipated Frankfurt Auto Show 2011 is the production version of the SUT-1 from SsangYong. This has been talked about for a while now especially since it was reported that SsangYong were facing difficulties.

But they remained strong and showed signs of recovery with the SUT-1 concept which was put on show at the recently 2011 Geneva Show. So it is only obvious that at Frankfurt, they push their intent further and took the covers off the production model. If you were excited at the concept, then you will be very excited to know that they have kept the designs intact.

This new pick-up model will come with all the 4×4 positives that SsangYong has been known for. According to the company, they are showing off their Sports Utility Truck which uses the traditional pick-up body with the modern design techniques. This is where you will get a host of cool additions while enjoying the capabilities of a commercial vehicle. You get a rear view camera, a trip computer, RDS and Bluetooth Audio system, sunroof among many others. Dual airbags, ESP and others are all in place to meet the safety standards and in the 2.0 Active Diesel Engine which complies with the Euro 5 emission standards, this is one mean model. The world should get ready as SsangYong is back! 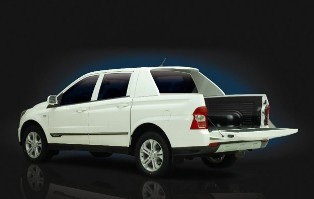