Malaysia’s authorized distributor and assembler of Renault vehicles TC Euro Cars has launched a new variant of the Renault Clio RS and this comes in the form of the Clio Renault Sport 200 Cup.

This will be the sibling of the widely popular Megane RS 250 Cup which extended the Megane product line not too long ago. This means that the Clio now comes with the same treatment where it comes with a new front end design while performance has been given some improvements while you also get some pretty cool Formula 1 inspired parts too like the cool rear diffuser, front splitters and the front-wing air extractors. So here you have a cool looking car, one which drives well and also exclusively made too.

The Clio RS 200 Cup will be sold for RM199,000 OTR without insurance and according to TC, there are bringing in the limited “Ange & Démon” edition which only has 666 units produced. This is where you will get the black wheels with red Brembos, Recaro seats as well as the R.S Monitor which is fitted in the Megane RS. It is powered up by a 2.0 liter F4R RS engine paired with a 6 speed manual transmission gearbox that takes only 6.9 seconds to reach the century mark. Top speed here is 225km/h and with a fuel consumption of 8.2 liters per 100km, it has an all-round better performance than its predecessor. Now you have a ‘Cup’ and ‘non-Cup’ version where the former comes also with 17 inch wheels with 215/45/R17 rubbers. 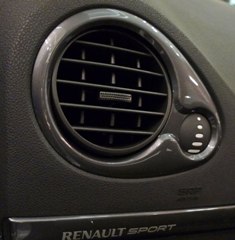