The controversial team Team Lotus led by Air Asia boss Datuk Seri Tony Fernandes rolled off its covers recently and revealed its new livery as well as its new engine, codenamed T128. The car was unveiled in the Team Lotus Notes, the Formula 1 racing team’s magazine in its special launch edition. In the report, Mike Gascoyne said that they are very confident of the new car for the upcoming 2011 season where the team wants to start looking at challenging the more established teams. Last season, Team Lotus which was then known as Lotus Racing were always referred to as ‘one of the 3 rookie teams’.

Meanwhile, Elliot Dason-Barber, the head of R&D and vehicle dynamics of the team was less ambitious where he said that with the new car, the team is moving forward and is looking to close the gaps between themselves and those in front of them and perhaps finishing in about 1 or 2 spots in front compared to last season. Riad Asmat, the Chief Executive Officer said that the T128 is what the team is looking at as the right direction and this could be just the answer to propel the team to the midfield.

Datuk Seri Tony meanwhile said that after the rigorous court cases and controversies off the track, it is good that they can start focusing on matters on the outfield. He also said that with the new set up, they are no longer just trying to outrun the rookies last season Virgin Racing and HRT but they are looking to close the gap among the more established teams like Williams and naturally, Lotus-Renault. 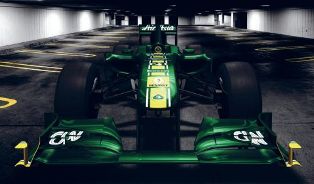