Barely will you find anyone who does not like the Chevrolet Camaro. In fact, it is harder to find anyone who does not like Bumblebee, and yes we are talking about the movie and the Transformers character which looks good, fights well and is a darling to anyone. For starters, the Chevrolet Camaro was awarded as the ‘Hottest Car’ in the recent SEMA Show. SEMA of course is the trade only (Specialty Equipment Market Association) Show which was held in Las Vegas last year and if you are a true enthusiast, this is the show for you.

But like it or not, the Chevrolet has become significantly popular since the start of production back in 2009 and of course widely contributed by the popularity of the robot movie, the double striped body from front to back has become synonymous with muscle, performance and speed.

In fact, Chevrolet showed us the Camaro SS at our own KLIMS (Kuala Lumpur International Motor Show) recently at PWTC where you got to get up, close and personal to the car version as well as a robot built figure nearby the Chevy booth. In SEMA, it was considered the hottest car where judges were impressed with its accessory friendliness among all other participants in Vegas. Being an American based show, it was up against the likes of the Ford Mustang, the Subaru Impreza and America’s own Dodge Challenger while the recently launched Kia Soul and the Ford Fiesta too were involved.

So what is so good about the Camaro, well it is built on the new rear wheel drive platform by GM (General Manager) and comes in 3 variants namely LS, LT and the more popular known SS. The LS and LT versions come with a 3.6 liter direct injection V6 engine that gets you up to 300 horses paired with a 6 speed manual transmission gearbox or a Hydra-Matic 6L50 6 speed automatic transmission gearbox. Of course, the Camaro SS is the cream of the crop with its LS3 6.2 liter V8 engine that boosts out 422 horses on its 6 speed manual transmission gearbox. Apart from that, it also comes with a fully independent suspension system on both its front and rear wheels while also get 4 disc brakes and Brembo calipers on the SS. 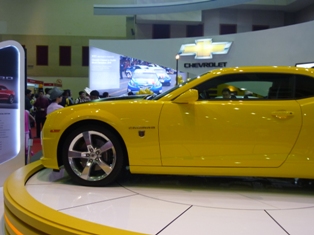 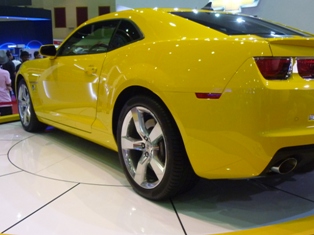 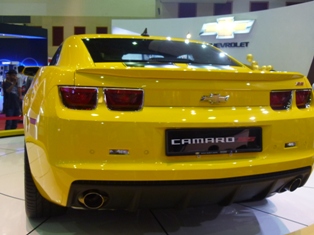 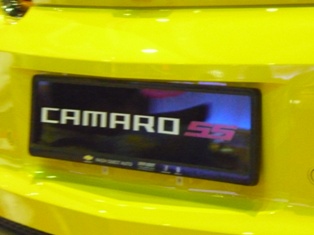