The world’s second largest auto maker Toyota has announced that they have started production of their compact sedan version of the Toyota Etios. The new variant will be joining in the product line of the new Etios which back in April had its Liva hatchback launched. Toyota said that with the new sedan model, they will be planning to roll out some 70,000 Etios annually from its India manufacturing plant. At the moment, the new Etios is only meant for the Indian market but they are also planning to export it to other markets in the region as well which means that it might get to our shores in the near future.

According to Atsushi Niimi, the executive vice president of the company, the launch of the new model is part of the company’s effort to provide high-quality products to meet the expectations of the Indian market which are also looking for affordable products. The Etios comes with superior fuel economy of 17.6 kilometers per liter and has a best-in-class cabin with a lot of luggage space and comfort. The car is positioned to compete against the likes of the Suzuki Swift and the Suzuki Dzire specifically and the new release might just give them a run for their money.

There will be 4 variants that come with the compact sedan model namely the J, G V and VX variants respectively. It comes with a 1.5 liter 16V DOHC engine paired with a 5 speed manual transmission that gets you up to 88 horses and 132Nm of torque. For the India market, the entry level model will be sold for around RM34k (or 496,000 rupees). It will also be equipped with steering wheel mounted audio controls, electric power steering which is also tiltable.

In terms of safety, they have put in the standard ABS with EBD as well as 2 airbags for the front passengers, which is quite a steal at this price. The Indian production and sales subsidiary, Toyota Kirloskar Motor Private Ltd said that the Etios sedan will be made using an initial 70% of local contents which will be increased to around 90% by 2013. They have already started taking orders for the new model there since the start of December while the test drive cars will be rolling into the showrooms starting next month. 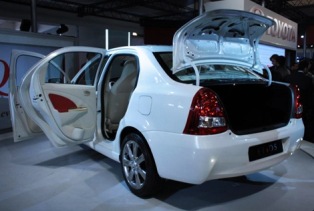