This concept brings you back to the very much celebrated hippies era and that of Woodstock and the gypsies and such when the retro looking Volkswagen Transporter microbus. Typically, looking at the images invoke quite a lot of visuals on how things were in the past and how retro is back in when the German automotive giant unveiled their Volkswagen Bulli Concept mirroring that of the 50s icon. In fact, it has given the people carrier segment a new thing to think about and perhaps some new opportunities as well.

The new Bulli Concept is a continuation of the Microbus concept unveiled by VW back in 2001 and this one is more compact and definitely more environmental friendly. It is powered up by an electric motor through its 40kWh lithium-ion battery pack combined with a front mounted engine that goes up to 113 horses.

As modern as it is, the front-wheel drive concept has iPad connectivity in within it 2.62 wheelbase structure. It is typically a 6 seater with the electric motor pushing the car from zero to hundred in 11.5 seconds with a top speed of 140km/h. The concept put on show at the recent Geneva Motor Show comes with the trademark ‘V’ in front and a 2 coloured scheme body. It is also fitted with 18 inch alloy wheels and a whole lot of space.

Inside the Bulli, there are only 2 rows of seats which can comfortably fit 3 passengers each. This beach seat is reflective of the old design and now it can be folded to free up more space for cargo. In fact, the seats when folded makes it look like beds which is ideal for travelling and outings. According to VW, the Bulli could well be the one design-oriented model which could potentially be what people are looking for especially if they are considering an MPV. Well, the 2001 version did not quite make it production because it was too big and was deemed unpractical and now, 10 years later it is smaller and perhaps more versatile but to date, it still remains as a concept as intended and no news if it will make it to production anytime soon. But with the demand for revolutionary designs rising and cool concepts moving into production, it might not be too surprising to see it on the roads soon. 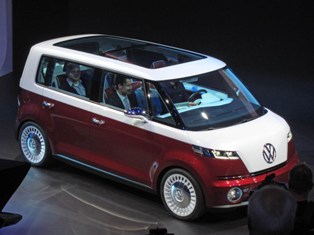 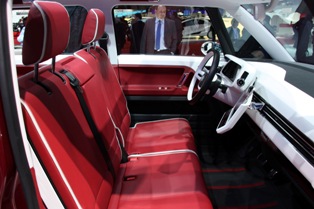 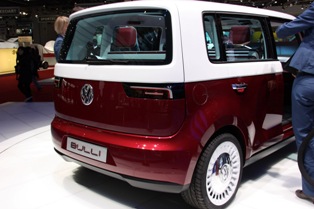 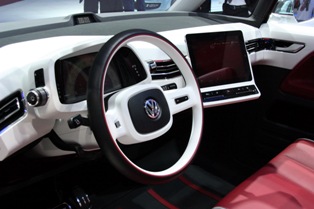