As promised, we bring you the premier looking Volkswagen Touareg Gold Edition which really is not the ordinary rally car for the commoner. No serious, this is a 24-carat gold glittering version which puts all modification to rest. If you think that a ‘loud’ car is measured by its engine decibels or its exhaust tailpipes, then this will surely change your perception of what a ‘loud car’ is. Period!.
Calling it a concept study model, it is quite clear that this Volkswagen is targeted at the rich and the famous by dressing the Touareg to its best, and we mean the best here. Some of the ‘gold’ areas here do look a bit out of place, like the gold rims although it does remind you of a Snoop Dogg video though. Having said that, it does boost the personality of this model somehow.

The SUV is given a whole new makeover, so to speak when they decided to go with the 24 carat gold element and it was with the Rally version that was on show at the first Qatar Motor Show recently. Of course as mentioned it has gold rims which is a customized 22 inch wheel while the roof rails, the window frames and various other parts too were given the golden treatment.

Apart from that, the mirror caps, the protective guard strips too were gold plated where they have also given you a nice looking ‘Touareg V8’ emblem, and did we forget, in gold as well. They also give the interiors the royal colours too where the VW, the gear knob, the outline of the touch screen system, some switches and lines were all given the gold plate too which to a large extend is quite distracting.

Nappa leather seats and Alcantara roofliners are fitted inside the cabin while for the dashboard, they have given you the Luna and natural brown leather scheme. They have also put in the ‘Magic Morning’ colour scheme on the outside, the same one you get on the rally edition. There aren’t much difference with the original Touareg in terms of its powertrain here though as VW is more concerned with who drives it rather than how does it drive. So typically, it is all up to who can afford this and who will afford to keep it safe at all times. 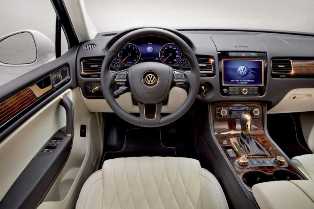 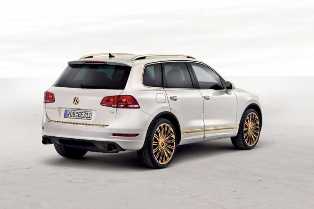 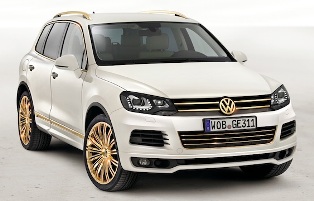