One of the biggest headlines that came about during the last Christmas period was what is known as the “World’s Most Expensive Car Crash” that took place in Japan along the Chugoku Freeway.

This involved some 14 exotic cars which involved 8 Ferraris among others. The crash was the result of the parade of the line-up involving Ferraris and Lamborghinis when the lead decided to change lanes without checking. It was at this time when there was another car next to him and when he tried to counter-swerve he hit the guardrail and that caused a moment of panic that saw the 14 cars piling up with one another.

The total estimated damages were US$4 million which police said that 3 other Mercedes-Benzs were also involved. Other cars apart from the Ferraris was a Lamborghini Diablo as well as the home favourite Nissan GT-R Skyline. In the end, wreckages and bits and pieces of the cars involved in the accident were scattered all over the highway. Fortunately, no one was hurt in the accident and it was a rare sight indeed to have so many luxury cars plastered around the road like scrap metal. Among the models involved in the accident include the F355, F512, F355, F430 and a F360 respectively. 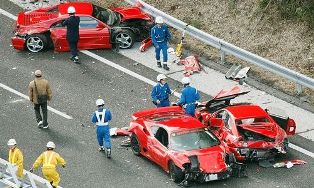