[FONT=Arial][SIZE=2]The X-Raid Team which is a German based company will be putting in their car to participate in the international racing competition where it is slated for the upcoming Dakar Rally 2011. This is the result of their ‘Mini All4 Racing’ which was first envisioned back in 2009. They have raked in French rally drivers Guerlain Chicherit and Michel Perin as his co-driver to man their car. The X-Raid team is surely going all out and is serious about maintaining their status in the competition and with their expertise and experience in developing rally cars over the years, the 2011 Dakar Rally would be very interesting. [/SIZE][/FONT]

[FONT=Arial][SIZE=2]If there is one thing you can be sure of the Mini is the fact that it seemed to be made for racing for speed and performance and the inclusion of the ‘Mini All4 Racing’ would be part of the 7 car team from X-Raid. This would be the largest team ever to be included by anyone in the off-road rally championship. For the Monster Energy X-Raid team, this would be its third vehicle to join its other 2. The feasibility of the project was first discussed in 2009 by Sven Quandt, the team director at X-Raid where they started talking with Magna Steyr and BMW in finding a new vehicle to replace the then BMW/Mini X3 CC which had already garnered 3 consecutive Cross-Country Rally titles.[/SIZE][/FONT]

[FONT=Arial][SIZE=2]After obtaining the approval to steer a new project, Quandt proceeded to work which began in Austria in October where the design team from Mini and Magna developed the new design while Quandt, together with Martin Ertl oversaw the whole project. The Dakar Rally readied Mini Countryman will be undergoing tests to get itself up and equipped for what is to be known as the “World’s Toughest Race’ set to take place from January 1 to 16 next year which will be staged in South Africa instead of its traditional home in Dakar. [/SIZE][/FONT][FONT=&quot][FONT=Arial][SIZE=2]This model will be fitted with a variable twin-turbo diesel engine which is based on the 2011 version of the BMW X3 CC model that will go up to 315 horses and 710Nm of torque. In terms of size, it is shorter and lower as compared to the previous X3 CC. [/SIZE][/FONT]
[/FONT] 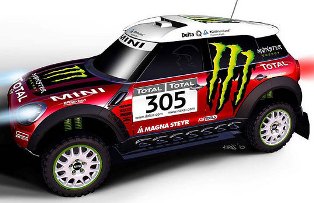 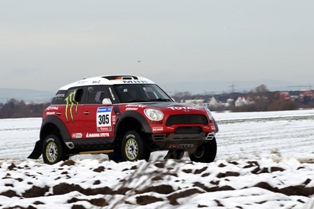