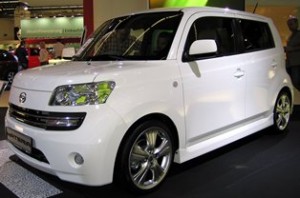 Daihatsu Motor Co Ltd is the owner of the Daihatsu vehicles brand. Its headquarters is in Osaka, Japan and is one of the most prominent automotive manufacturers in the world today. Founded in 1907, Daihatsu produces commercial vehicles and automobiles while it is heavily involved in the production and supply of engines as well.

Daihatsu is a very well-established brand in the compact and sub-compact vehicles segment and in the commercial vehicle segment as well. It is a subsidiary of the Toyota Group, one of the largest automotive companies in the world today. It currently hold a 25% stake in Perusahaan Otomobil Kedua Malaysia or Perodua of Malaysia.

The Hatsudoki Seizo Co Ltd was founded in 1907 before Daihatsu was established to replace it in 1951. It will continue to grow and exported its vehicles to Europe throughout the 1960s but it was only about 2 decades later that Daihatsu began enjoying more success. It will then in 2011 announced that the brand will not be exporting its cars to Europe in the midst of heightened competition.

For many decades, Daihatsu has been known to be a compact car maker. Unknown to many, the brand has been one of the pioneers of making electric vehicles. This dates back to the 1970 World Expo in Osaka when Daihatsu showed their pavilion cars which would then set the stage for the DBC-1 into the golf carts and vehicles market.

After that, they produced the Fellow Max Kei car and by 1973, Daihatsu showed off its electric car prototype. Besides that, Daihatsu’s foray into the standard car and vehicle engines have put it among the most reliable and robust models in its class.

Apart from that, the carmaker had discontinued its Daihatsu Copen which it has been enjoying tremendous success for more than a decade. The Copen is an award-winning model which was launched in 2002. It won several top awards in the industry and was the only convertible mini-car. It had a very revolutionary and classical design but had to be discontinued due to poor sales.

One of Daihatsu’s recent models is the Daihatsu Cast sport seen during the 2015 Motor Show. The kei-car is a sportier version of the Cast Activa and continues the tradition that makes the brand such a preferred player, especially in this category of vehicles.

Daihatsu vehicles continue to be a major force in Asia where it plays a prominent role in the development of the automotive industry of countries like Malaysia. The partnership with Perodua saw Daihatsu supplying engines for rebadges models like the Kancil and Kelisa while the Myvi is the best-selling model in the country for several years.